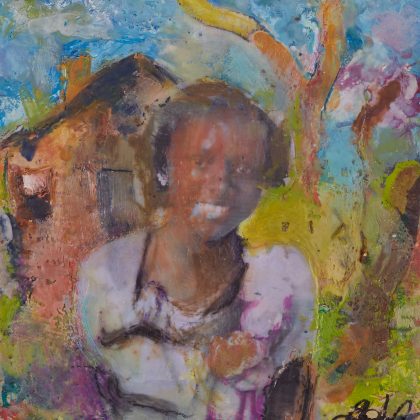 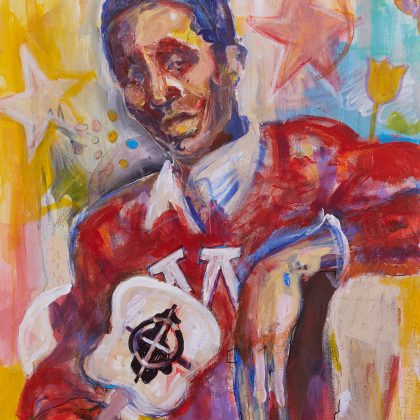 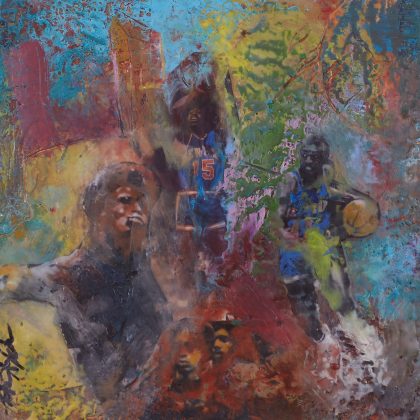 A perceptive artist whose illuminating works on un-stretched and unprimed canvases have gained him the acclaim of a coterie of private and institutional art collectors, this contemporary artist has added to the excitement of his art through the use of the unstructured canvas as an actual medium in his work.

“Using the ragged edges of the canvas has enabled me to create more of a feeling of movement to my work,” Sampson explained recently. “It also provides the viewer an insight into the actual process used to create the work. It is presented as it was conceived.”

Sampson, a native of West Palm Beach, Florida, who has a Fine Arts degree from the University of Maryland, combines the skillful use of acrylic paints and vigorous broad brush strokes to create a canvas pulsating with rhythm and movement.

A jazz enthusiast, Sampson’s most exuberant paintings are the expansion of melodic ideas. He sees his figurative portrayals as attempts “to emote, to touch, to move you to the center of it all, to enable you to feel certain changes, like fleeting moments of memory.”

Sampson has completed a series of works portraying the life and play of the African-American men who starred in the Negro Baseball Leagues for nearly half a century. Through vibrant acrylics on canvas, vivid watercolors, and mixed media collages, Sampson recalls the play and excitement of such teams as the Homestead Grays, the Black Yankees and the Black Barons. Sampson’s work depicting a Pittsburgh Crawford player was published by the Smithsonian Institute in 1994.

The baseball series is indicative of Sampson’s direction as a painter. “I feel that representing positive aspects of our history as African Americans is a priority and a responsibility that I have as a visual artist. Long after we are gone, hopefully, the art will remain as a testament to our culture. Historically all cultures have left behind a trail of who they were that is often omitted by the dominant culture, we as African Americans must do the same.”

A recurring theme in Sampson’s work is the dominant male figure, done in epic and heroic scale. Painting such as They Built a Nation, a painting of the artist’s grandfather and two uncles, which is over seven feet tall, exudes pride and dignity. Man in the House which depicts an adolescent son looking up to his stately father, and Endangered Species, a portrait of a young Black man are all fiercely proud and heroic statements which need no explanation.

During the summer of 1994, Sampson was awarded a private fellowship which allowed him to go to Spain where he painted landscapes, the people, and most notably, the torsos.

Sampson has been featured in numerous national publications recently, such as Town & Country, Playbill, American Visions, and Black Enterprise magazines. He has been critically recognized in the Washington Post for his first retrospective at the University of Maryland in 1997, and in the International Review of African American Art comprehensive guide for collecting in 1998.

A major breakthrough came in 1997 when he was commissioned by Absolut Vodka to create a painting for their award winning ad campaign. Absolut Sampson has been a part of a traveling collection whcih has made stops in Miami, New York, Detroit, Atlanta, Chicago, Houston, Philadelphia, and Washington, DC.