“At one point I called my art Neo African abstract expressionism but as accurate as that is in describing what the art may look like it falls short of its spiritual intent.

Throughout my career I’ve been looking to capture the spiritual essence of making art or the power of spirit within the lines and markings I put on canvas and paper. I honestly believe artists can be conduits of a universal spiritual force.

Much like aboriginal artists/ shaman from different cultures around the world make objects we call art, to house and direct that spiritual essence. 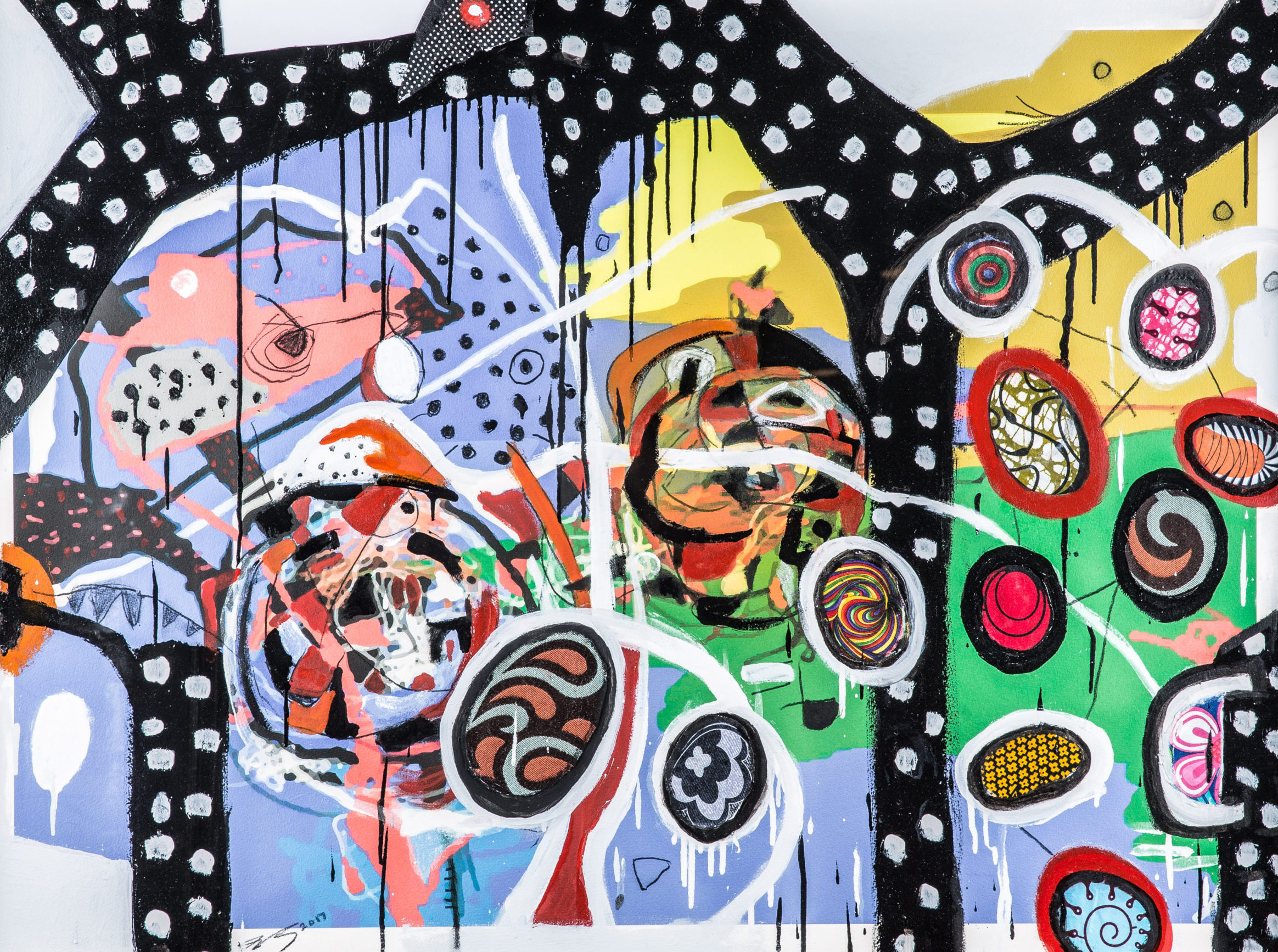 Modern artists can do the same thing with intent. I create works with the intent to house and reflect spirit. I feel finding your unique artistic voice is that vehicle.

The abstract marks and flow of paint found in my artwork best reflects my connection to seeking and finding spirit.”

Danny Simmons, Jr., is an American abstract painter from Queens, NY, who once coined his particular style of painting as “neo- African Abstract Expressionism.” His talent and passion for the arts reaches beyond the canvas; He is a published author, poet, painter and art philanthropist. He has become a leader in the art world with his philanthropic ventures, artistic talents and creative mind and drive.

Simmons is the eldest of three sons. Raised by parents who emphasized the importance of education as well as individualism, Danny embraced fine arts while watching his mother, also an artist and painter. He’d eventually take on her love for painting and his father’s love for the written word – becoming renowned in both avenues of expression.

The New York Times, in reviewing one of his art exhibitions, stated that Simmons “injects freshness” into his abstracts, and that they are “meticulously rendered and decoratively impressive.” Today, his works appear in prominent locales around the globe, including: Brooklyn Academy of Music, Brooklyn Museum, Chase Manhattan Bank, Deutsche Bank, Schomburg Center for Black Culture, The Smithsonian, United Nations, and, on an international scope has shown work in France, Amsterdam and Ghana. In 2015, he will serve as a scholarly consultant for the Smithsonian National Museum of African American History and Culture (NMAAHC) in Washington, DC.

Simmons brings an equal passion to the written word, thanks to his father, also an outstanding poet. The elder Simmons’ example during a time of racial strife and social upheaval impressed upon Danny the importance of maintaining integrity and serving as an advocate for truth and right.

These experiences prompted Danny to pen the critically acclaimed ‘Three Days as the Crow Flies’ and ‘I Dreamed My People Were Calling But I Couldn’t Find My Way Home’. In his most recent release, titled ‘Deep in Your Best Reflection’, Simmons takes on an even more personal tone in a compilation of real-life texts and emails shared with a former girlfriend.

Danny Simmons also played an instrumental role in the nation’s newfound love for poetry, particularly in the conceiving of and co-producing the hit HBO show Def Poetry Jam, a weekly TV series that exhibits an eclectic blend of old-school poets (such as legendary expressionists Nikki Giovanni and Amiri Baraka) and new-school poets. Its success is quite evident: Def Poetry is now offered as an elective at the University of Wisconsin, and Simmons won a Tony Award for the Broadway version of the show.

Simmons is co-founder, along with his siblings, music mogul Russell, and hip hop legend Joseph Simmons aka “Rev Run”, and president of the Rush Arts Gallery. He is also founder and VP of the Rush Philanthropic Arts Foundation, a 501(c)3 organization “dedicated to providing disadvantaged urban youth with significant arts exposure and access to the arts.” He is a former board member of the Brooklyn Museum, the Brooklyn Public Library, the New York Foundation for the Arts, and the National Conference of Artists. And his own works have been obtained by art lovers and renowned celebrities everywhere.